H.P. Blavatsky and Her Writings

H.P. Blavatsky and Her Writings 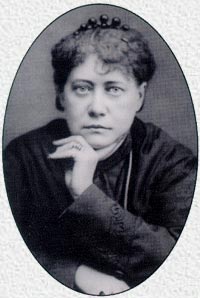 Helena Petrovna Blavatsky (1831-1891), one of the founders of the Theosophical Society, was a remarkable woman who has made a great impact on the thought of the Western world. In her own day, she was controversial because of her remarkable abilities of extrasensory perception, her forthright and outspoken nature, and her fearless attacks on hypocrisy and bigotry. Even today, she continues to be the center of curiosity and attention as the precursor of "new" ideas. Her great metaphysical knowledge is embodied in her literary work, which has directly or indirectly influenced inquiring minds all over the world.

Helena Blavatsky was born of a noble family in Russia. From earliest childhood she attracted attention with her ability of producing psychic phenomena at will. Yet she was not interested in such powers for their own sake, but for the principles and laws of nature that govern them. She became a student of metaphysical lore and traveled to many lands, including Tibet, in search of hidden knowledge. These were extraordinary travels for a lone woman in the nineteenth century. In the 1870s H. P. Blavatsky came to New York and, with Colonel H. S. Olcott, William Quan Judge, and others, formed the Theosophical Society in 1875.

In 1878 H. P. Blavatsky became an American citizen, the first Russian woman ever to do so. In 1879 she and Col. Olcott moved to India, and in 1882 they established the headquarters of the Theosophical Society at Adyar, near Madras. This remains the international headquarters for the Society, which is now established in seventy countries of the world. In 1885 H. P. Blavatsky went to Europe and settled in London, where she completed her magnum opus, The Secret Doctrine. Much of the knowledge in this book and her other writings was derived from Eastern teachers with whom she came in touch early in life.

Through her many writings, H. P. Blavatsky—"Madame Blavatsky" or "HPB" as she came to be known—has shared some of her extensive knowledge of the philosophies and religions of the world, the wisdom of the East and the West, symbolism, metaphysics, esoteric philosophy, and the practical application of all these to life. She was a prolific writer, and newspaper and magazine articles on a variety of subjects flowed steadily from her pen. These works fill fifteen volumes of her fully indexed Collected Writings.

The first major book by H. P. Blavatsky was Isis Unveiled, in two volumes. It created a sensation when published in New York City in 1877; the first edition of 1,000 copies sold out in two days. Within seven months, three printings had been issued. The book has as its subtitle A Master Key to the Mysteries of Ancient and Modern Science and Theology. Volume 1 deals with claims of "infallibility" for science, while volume 2 deals with similar claims for religion. Both show that the Ancients had a wisdom that has been partly forgotten in our time.

Isis Unveiled covers much more than its subtitle indicates, however. For instance, the author moves from ancient Greek views on matter and force advanced by Pythagoras and Plato to the Kabbalistic religious philosophy developed by Jewish scholars from a mystical interpretation of the Scriptures. Blavatsky discusses mythological stories in many religious texts, aspects of magic, ancient Egyptian writings, classical philosophies, world religions, and a multitude of other subjects. In her preface, she states that the book is "a plea for the recognition of the Hermetic philosophy, the anciently universal Wisdom-Religion."

Blavatsky's greatest work is The Secret Doctrine. This book appeared in 1888 in two large volumes, the first concerned with cosmogenesis, the study of the origin and development of the universe, and the second with anthropogenesis, the study of the origins and development of humanity. This book continues in greater detail the themes set forth in Isis Unveiled, its subtitle, The Synthesis of Science, Religion, and Philosophy, expressing the aim of the work.

HPB made it clear that The Secret Doctrine was not written as a revelation but is rather a collection of fragments scattered throughout thousands of volumes embodying the scriptures of the great Asian and pre-Christian European religions and philosophies. Furthermore, she strongly rejected the dogmatic interpretation of any of her work. The reader is asked to study the ideas from this or any other source only in the light of common human experience and reason.

The Secret Doctrine outlines a vast scheme of evolution relating to the universe and to humanity, and to the unseen as well as the seen worlds of manifestation in which life is said to exist in thousands of forms. It is based on three fundamental propositions:

Although drawn from many sources, The Secret Doctrine is based largely on an archaic manuscript titled The Book of Dzyan, of which it is an interpretation. The stanzas of The Book of Dzyan are not easy to understand, but they reveal, to the person willing to study them, a sublime description of cosmic evolution: the reawakening of the universe after a period of quiescence, the differentiation of forms, the process of world formation, the appearance of humanity on earth, and the early evolution of our species. The work is not simple, but as the reader delves into it, the magnitude of Blavatsky's undertaking becomes apparent. Anyone who approaches the book seriously will gain a new respect for the author and for her scholarship and great knowledge.

More than a hundred years after its first publication, The Secret Doctrine continues to attract thousands of students who mine its rich depth of knowledge and wisdom. This work is available in various editions, including a paperback set with an authoritative introduction and notes and a third volume containing a detailed index and bibliography. The Secret Doctrine continues to be the principal source book for students of Theosophy, not as the final word on the subject, but as a stimulus to encourage the student to ponder its thoughts with a free and questing mind.

In addition to Isis Unveiled and The Secret Doctrine, H. P. Blavatsky wrote a number of shorter books. One of these, The Key to Theosophy, is a valuable introduction to Theosophical thought and philosophy, dealing especially with the implications of Theosophy for living. This book is written in the form of questions and answers, focusing upon who we are and how we relate to the world around us.

Blavatsky is remembered not only for her works of scholarship and her industry but also for a short book of deep spiritual insight and instruction called The Voice of the Silence. It is her translation of an old Eastern manuscript and includes her explanations and comments on a series of precepts offered to those seeking the path to enlightenment. Wisdom and an understanding heart are evident in the skill with which HPB has safeguarded the original poetic imagery as she rendered the ancient verses into English prose.

First printed in the late nineteenth century, The Voice of the Silence has been published in many editions and languages. It is read and treasured around the world for its poetic imagery and spiritual power. Here are a few passages:

Thou canst not travel on the Path before thou hast become that Path itself.

Let thy soul lend its ear to every cry of pain like as the lotus bares its heart to drink the morning sun.

Let not the fierce Sun dry one tear of pain before thyself hast wiped it from the sufferer's eye.

But let each burning human tear drop on thy heart and there remain, nor ever brush it off, until the pain that caused it is removed.

Help Nature and work on with her, and Nature will regard thee as one of her creators and make obeisance.

Mind is like a mirror; it gathers dust while it reflects. It needs the gentle breezes of Soul-Wisdom to brush away the dust of our illusions.

The wheel of the good Law moves swiftly on. It grinds by night and day. The worthless husks it drives from out the golden grain, the refuse from the flour. The hand of Karma guides the wheel; the revolutions mark the beating of the Karmic heart.

Sow kindly acts and thou shalt reap their fruition. Inaction in a deed of mercy becomes an action in a deadly sin.

Shalt thou abstain from action? Not so shall gain thy soul her freedom. To reach Nirvana one must reach Self-Knowledge, and Self-Knowledge is of loving deeds the child.

Step out from sunlight into shade, to make more room for others.

To live to benefit mankind is the first step. To practice the six glorious virtues is the second.

Of teachers there are many; the MASTER-SOUL is one . . . the Universal Soul. Live in that MASTER as Its ray in thee. Live in thy fellows as they live in It.

Behold, the mellow light that floods the Eastern sky. In signs of praise both heaven and earth unite. And from the four-fold manifested Powers a chant of love ariseth, both from the flaming Fire and flowing Water, and from sweet-smelling Earth and rushing Wind. . . All Nature's wordless voice in thousand tones ariseth to proclaim: . . . A Pilgrim hath returned back from the other shore . . . Peace to all beings.

H. P. Blavatsky devoted her life to the service of humanity, to bringing the Wisdom of the ancients back into the awareness of her contemporaries. That Divine Wisdom, which she called Theosophy, inspires a compassion for the sufferings of our fellow human beings and a practical altruism that seeks not merely to alleviate the symptoms of misery, but to remove its cause: ignorance of our fundamental unity with all other beings. Helena Petrovna Blavatsky's life and works are directed entirely to that goal.

For more information, go to the Blavatsky Archives Online at http://www.blavatskyarchives.com/.