The TS Archives: Bringing History into the Present

Every day is an adventure in the archives of the Theosophical Society in America. Recently, for example, I received a heavy

bronze tree plaque found by a visitor near the Garden of Remembrance at our Olcott headquarters. The inscription particularly caught my eye because of its inscription: "Presented by Butte Lodge May 6, 1925" (right). That was the very first day that trees were planted on the bare fields of our newly purchased estate in Wheaton (left). Archival records quickly showed that a Crimean linden was donated by the Butte Lodge at a cost of $10.50. The tree did not survive long, and was replaced by a sycamore. 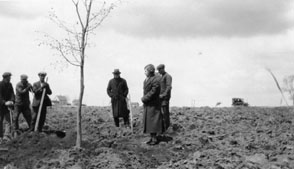 Archives are records of enduring value created or collected by an individual or an organization. The value can be legal, financial, historical, artistic, or intrinsic, but to an archivist the worth of a record is based on its authenticity as evidence of the originator's activities and interests. Archives are far from being dusty old papers, but are imbued with all the vitality of current events and foreshadowings of the future. Our institutional memory is a tapestry of correspondence and reports, recordings and photographs, databases and e-mails. The TSA archives holds organizational papers that were once actively produced, received, and used by our staff. In the 1920s TSA president L. W. Rogers wrote an article in The Messenger asking for trees to be donated; a bookkeeper recorded $10.50 received from Butte, Montana; a secretary ordered a bronze plaque; a typist created a list of the tree locations; and a photographer snapped the image. And, fortunately for us today, someone retained those records "for the archives," never guessing that we would be looking at them with new interest in 2012.

The TSA archives department exists primarily to preserve organizational records, but serves another major function as a 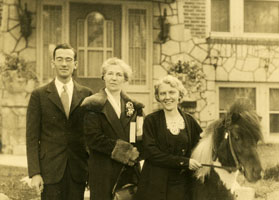 repository for materials donated by individuals and groups. These special collections include the papers of the great Blavatsky scholar Boris de Zirkoff; the photo albums of author Clara Codd (right); a large mixed-media collection from past TSA president Dora Kunz and her husband; the postcard collection of Carl E. Holbrook, including many cards sent by C. W. Leadbeater; two volumes of photographs belonging to author and clairvoyant Geoffrey Hodson; and many more. The family of painter Henry Schwartz gave us a magnificent portrait of Jiddu Krishnamurti made in 1926 (which now hangs outside the president's office at our Olcott headquarters), along with papers and photographs from the old Oak Park Lodge.  Donations have come in many formsâ€”boxed records from a lodge that closed; a single photograph; postage stamps featuring Theosophists; a palm-leaf manuscript; a horseshoe found on the grounds. A proactive archivist tries to locate papers held in private hands and to capture reminiscences as oral histories. Memoirs, correspondence, photographs, Web pages, and artifacts from families and lodges can add rich detail to the Society's history. Many of our accessions come unexpectedly, sometimes without explanation. One gentleman from Kentucky thought it was important for us to have a photograph of a dead weasel covered with eight swastikas, but he gave no idea of its significance. Our most recent gift, on the other hand, is truly a treasureâ€”a small sculpture of a Bodhisattva, owned by TS cofounder Henry Steel Olcott, that was sent to us by historian Joseph E. Ross. 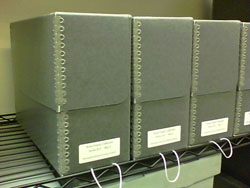 In archival practice, records groups are identified by provenance (the creator or collector of the materials) and maintained in their original order. At times the provenance is unknown and must be deduced from the contents of the records. For example, an original signed letter would usually belong to the papers of the recipient, whereas a carbon copy of the same letter would be found in the files of the writer. Both the original and the carbon may have valuable handwritten notations as well as attached materials reflecting the different viewpoints of the writer and recipient. Often boxes of old papers arrive in a jumble, and the archivist must draw order from the chaos by devising a system of organization that will be useful for researchers. Each collection of records is documented in finding aids designed to describe the materials and their organization (left).

Management of archives requires continual balancing of preservation with access. Papers, photographic images, audiovisual materials, artifacts, and digital objects all have different requirements for physical preservation and access. Colored pigments and inks can deteriorate rapidly at normal office temperatures, and cellulose-based papers become brittle and discolored. The archivist must apply preservation measures to prevent or delay this degradation. Temperature and relative humidity are monitored, and the environment is kept free of dust, contaminants, mold, and insectsâ€”a demanding task for us in a structure built in 1926. Some documents are simply too fragile to handle, and access can best be provided through digital or printed surrogates. Preservation of digital media requires particular combinations of hardware and software that rapidly become obsolete, so continued access to digital materials depends on frequent migration to the latest-greatest technology. Preservation of older records is simpler. Papers and photographs are transferred into labeled, acid-free folders and boxes, with fasteners like rubber bands and paper clips removed.

Ultimately, continued access is the goal. We do not acquire and maintain archival materials like misers hoarding treasure. Free access is our policy, with very few exceptions. Administrative records are not restricted except for certain personnel and legal matters, but privacy and confidentiality must be respected. Dora Kunz, for example, left us case studies of healing sessions using Therapeutic Touch, a healing modality of which she was the coinventor. Legally, the names of patients must be redacted (omitted or covered up) before we can permit researchers to view those papers. Copyright is another legal issue that must be considered when dealing with unpublished works and photographs. Restrictions are occasionally imposed on donated collections, although we try to establish the broadest rights that donors will allow as we draw up deed of gift agreements.

A few questions come from the general public, and occasionally involve dramatic misconceptions. A foreign student telephoned asking about Henry Steel Olcott, of whom he knew little except that Olcott was a national hero in the young man's home of Sri Lanka. He said that in a competition in his secondary school he had been awarded the "Sir Henry S. Olcott Award" for public speaking. It came as a surprise to him that Olcott was an American colonel rather than a British knight! Another caller wanted to know if Olcott had fathered illegitimate children in South Asia, and I had to convince him that this was extremely unlikely given Olcott's impeccable ethics and Buddhist vows.

The requests of academic researchers range widely. Some questions have involved Reiki founder Mikao Usui; early Theosophical terminology; L. Frank Baum, author of The Wizard of Oz; the fourth dimension; architect Marion Mahoney Griffin; the Association of Hebrew Theosophists; composer Alexander Scriabin; the architecture of Theosophical communities; and educator Maria Montessori. Archival collections cannot always contribute the needed information, but our excellent library and its periodicals usually fill in the gaps. Grateful academics often reciprocate with information of their own. The Thomas Edison Archives recently sent scans of letters addressed to the inventor by a Theosophist, and a Reed College archivist traded photos and facts about lecturer Pieter K. Roest, who helped write the postwar constitution of Japan.

Books are one of the material benefits coming out of assisting researchers. Each author prints an acknowledgement, "Courtesy of the Theosophical Society in America Archives," adding to our name recognition and leading future researchers to our resources. Authors donate copies of their works, which become available in our national library.

Genealogical research can be very rewarding. Often a member simply wants to know when or whether a deceased relative was also a member, but archival materials can also bring healing across miles and decades. Stephan, an East German scholar, e-mailed asking whether his great-aunt Ilse Getz had been a member of the Society. As a matter of fact, in the mid-1930s, when Nazism was on the rise in Germany, Ilse and her husband Franklin (figure 6) immigrated to the United States. After being welcomed into the Society by members of the Oak Park (Illinois) Lodge, they moved to the headquarters campus in Wheaton, where he became a bookkeeper and she worked in the kitchen. The young couple lost contact with their families during World War II, and could not resume communication in the years of communism in East Germany. Stephan visited our campus to see where Ilse had found a home. Membership records, old issues of The American Theosophist, papers from the Oak Park Lodge, and photographs of our staff told her story. Stephan's grandmother had never known what happened to her dear sister, and the family was thrilled to see photographs of Ilse and Franklin from the 1940s, young and happy. Stephan wrote, "Your efforts reopened a lost past. Since yesterday there are and will be again people who look at the photos of this couple with deep emotional involvement and the intention to remember and explore their lives."

History at this individual level has proved compelling to some of our youngest volunteers in the archives. Several high school students helped me sort correspondence from 1946 concerning a massive project to ship parcels to needy European Theosophists. The teenagers were amazed to read accounts of harrowing wartime experiences along with appeals for thread, shoelaces, and soap (figure 7). They made earnest efforts to read letters written in French and German and urged me to scan the documents for a Web page. I was struck by the power of the past to engage young hearts.

Our archival collections have materials that are found nowhere else. When Ananda College in Sri Lanka planned its 125th anniversary celebration, we were able to assist the college's Old Boys Association with scans of school periodicals and papers from 1914-17, when Fritz Kunz served as principal. No other archives could provide that little slice of history, and it is pure pleasure to be able to share items that have been neglected for decades.

Working as the TSA archivist carries me in directions that I never anticipated. I have new acquaintances in Siberia, Portugal, South Africa, Israel, New Zealand, Sweden, and many other countries. Daily I am discovering the depth and breadth of Theosophical influence in the world, and I try to bring it to light in displays, writings, and presentations. Web displays will be featured in the near future, and work is progressing on an on-line encyclopedia.

Theosophists who want to keep our history vibrant can help in many ways. Members of lodges, other local groups, and Theosophical families should consider how their own records are stored. Keep programs, clippings, membership rosters, and correspondence, in addition to legal papers. Remember to take lots of photographs, including action shots, and label them with names and dates. During our 2012 Summer National Gathering, scholar Michael Gomes will be conducting a workshop on how to write a lodge history, so you can follow his guidance in documenting your own group. Consider having a work-study visit here at the Olcott campus to assist in scanning documents, identifying people in old photographs, writing research articles, and developing displays. Interview your older members, and send World War II memoirs to the archives as a contribution to an upcoming book about wartime experiences.

Always remember that the TSA archives and the Henry S. Olcott Memorial Library have resources that can aid your studies, and that we appreciate your assistance in providing resources for future theosophists. Contact the Archives at archives@theosophical.org or 630-668-1571, extension 353. 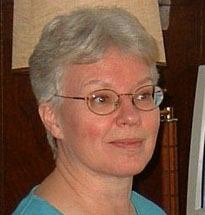 Janet Kerschner joined the Theosophical Society in America staff in 2006 and serves as archivist. She has a graduate degree in library science and is a member of the Academy of Certified Archivists. Among many other projects, Janet is currently working on a book about Theosophists during World War II.